In Gujarat, the demand for waiver of first semester fees of private schools is becoming fierce. Amid the demand, the state government held a meeting with the board of trustees on Tuesday. At the meeting held in Gandhinagar, there was a strong demand by the parents to waive the fees for three to six months. The state government has not denied the demand and has decided to convene a meeting again. This is an indication that the government is seriously considering the issue and will move towards providing greater relief to middle-class parents.

Earlier, the state government had held meetings with school administrators and various unions. After Tuesday's meeting, Education Minister Bhupendrasinh Chudasama said no decision has been taken yet on the issue of fee waiver. In addition to academics from all over the district, we have called for the names of parents of different classes of people, including doctors, traders and lawyers who are truly guardians. A virtual meeting will be held with them and their suggestions will be taken. The final decision will be made. Guardians, on the other hand, say the stat 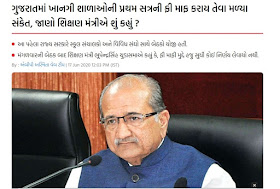 e government has decided to hold another meeting on June 20 or June 21.

However, no decision has been taken by the government on the issue of fee waiver and the final decision will be taken after meetings with the parents.