Home » circular » No room for No Entry to be installed outside the hotel kitchen, anyone can check for cleanliness

No room for No Entry to be installed outside the hotel kitchen, anyone can check for cleanliness

Posted by : Job To Dekho
Friday, November 8, 2019
No room for No Entry to be installed outside the hotel kitchen, anyone can check for cleanliness.

No boards like 'No Admission without permission' or 'Admission only with permission' can be installed in the state hotel from now on. 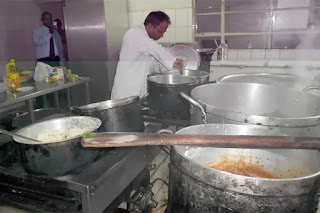 The state Department of Food and Drugs has made a big decision on hygiene in hotels. That is why from now on, any ordinary citizen can enter the kitchen of any hotel, restaurant or canteen to check for cleanliness. Typically, no-entry boards are found outside the kitchens of hotels, canteens, or restaurants. From now on, no such board can be kept outside the kitchen.
In this regard, a circular has been issued by the Food and Drugs Department of the state. As from now, kitchen windows or doors have to be installed in restaurants or hotels. This has been ordered so that consumers can see inside the kitchen from the outside.

What is written in the circular?
The state Food and Drug Regulatory Authority has issued a circular on November 6th on behalf of the Food and Safety Commissioner. The letter has been sent to all district officials as well as designated officers of all the municipal corporations of the state including Ahmedabad.

The circular states that all designated officers (including municipal corporates) under the system should be informed that they have hotels, restaurants, canteens, etc. in the area, subject to removal of boards such as "hotel, restaurant kitchen," admission only with permission. Immediate inspection and immediate removal of boards where "No Admission without permission" or "Admission only with permission" is installed outside the kitchen Instructing. In addition, instructing the kitchen to be clean. Instructing customers to place glass windows or doors as they see the inside of the kitchen. "

Hotel and restaurant owners are expected to be more vigilant after such a circular by the state Food and Drugs Department. In addition, placing glass in the kitchen as customers can see inside will also emphasize hotel owners' cleanliness.