ICC Cricket World Cup can be called the Mahakumbh of the sports. Every team wants to win this prestigious tournament at least once. 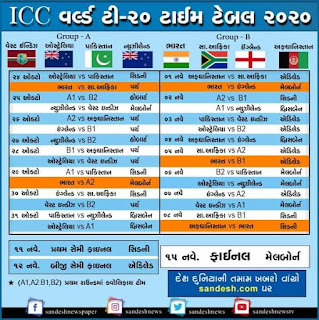 ICC T20 Men's World Cup Teams
The opening match of the ICC Men's T20 World Cup 2020 will be played between Sri Lanka and Ireland at the Kardinia Park Stadium. Participating teams are as follows,

The Melbourne Cricket Ground is the birthplace of Test Cricket (1877) and one-day international cricket (1971). In fact except for Lord's stadium; the MCG is the only stadium that has hosted the ICC Cricket World Cup Final more than once (1992 and 2015).

Tickets for the ICC T-20 World Cup Tournament
The basic price of tickets for the whole is kept at $5 for children and $20 for Adults. Worth to mention that the ticket price of Australia vs Pakistan match is doubled as compared to the normal price.

Tickets for all matches are now available at t20worldcup.com. Click on link given below to purchase Tickets…

List of T20 World Cup Winner
The men's T20 World Cup began in the year 2007 and India won the initial tournament under the captaincy of Mahendra Singh Dhoni by defeating Pakistan.

The West Indies is the most successful team in this format, having won the T20 World Cup twice.

It is expected the Indian team will perform well in the upcoming ICC T20 Cricket World Cup 2020 and the World Cup trophy will be brought to India once again.