As predicted by Skymet Weather, many parts of Gujarat received light to moderate rain with isolated heavy spells during the last 24 hours. Baroda, Rajkot, Bhuj, and Dwarka were the ones to witness these showers. The region of Saurashtra and Kutch also observed some rainfall activities.

According to Skymet Weather, good rains will continue over the Gujarat region, particularly, places like Rajkot, Ahmedabad, Surat, Valsad, Baroda, and Panchmahal will get to see good rain and thundershower activities for the next two days. 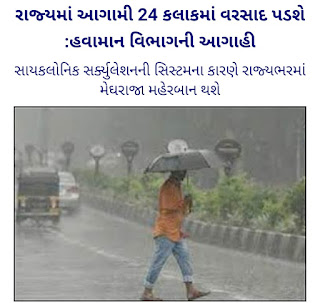 Meanwhile, the region of Saurashtra and Kutch will receive light to moderate rains. These activities are expected to continue for the next 24 to 48 hours. Thereafter, the intensity will decrease, however, on and off rains will continue in many parts of Gujarat for another four to five days.

These rains would be the result of a Cyclonic Circulation over South Gujarat and adjoining North Maharashtra region. After 24-48 hours, this weather system will fade away, but due to moisture-laden winds (southwesterly winds) from the Arabian Sea, on and off rainfall activities would continue.

The revival of Monsoon has helped the state of Gujarat to overcome its rain deficiency to some extent. And with more showers coming up, the rainfall statistics of Saurashtra and Kutch region is expected to improve further.

According to our meteorologists, good Monsoon showers will continue to lash the Gujarat region for next 24 to 48 hours. Meanwhile, rains will be scattered over Saurashtra and Kutch for the next two days.

On July 24 and 25, the rain intensity would decrease slightly, however, July 26 onward, once again the Monsoon rains will pick up the pace. During this period, light to moderate rains will occur and chances of heavy showers are bleak.

These rains would be a result of the Cyclonic Circulation over the Gujarat region and adjoining areas. Also, the moisture-laden winds (southwesterly winds) from the Arabian Sea are continuing.

The ongoing rains are beneficial from an agriculture point of view as well and in restoring the soil moisture for the upcoming crops.