Election Results 2019: BJP will be hoping to make a clean sweep in Gujarat as the counting begins today for the Lok Sabha elections 2019. According to the India Today-My Axis India Exit Poll, the saffron party may possibly win all 26 seats in the state, while Congress is expected to win 1 seat maximum if it opens its account. In the previous general election, Narendra Modi came to power at the Centre and the BJP had won all the 26 seats in Gujarat. However, this time anti-incumbency in the state has been rising due to demonetisation, hasty implementation of GST, land acquisition issues and declining industrial production, which could affect the BJP vote-share.

Voters in Ahmedabad (both east and west), Gandhinagar, Vadodara, Surat and Rajkot have historically supported Modi for development initiatives in their cities. Thanks to which, the BJP has a strong base in urban Gujarat. Additionally, city municipalities and local civic bodies are also run by the saffron party in the state. But outside the urban space, caste politics play an important role. On the other hand, Congress saw a revival during the 2018's assembly election campaign and witnessed Rahul Gandhi campaigning in PM Modi's home state. The state also witnessed a massive shift in elector's support when Hardik Patel joined the grand old party.

LAST UPDATE AT 12:00 P.M.
STAY CONNECTED WITH US. UPDATE AT EVERY 5 MINUTES 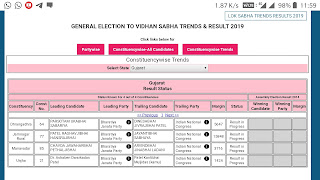